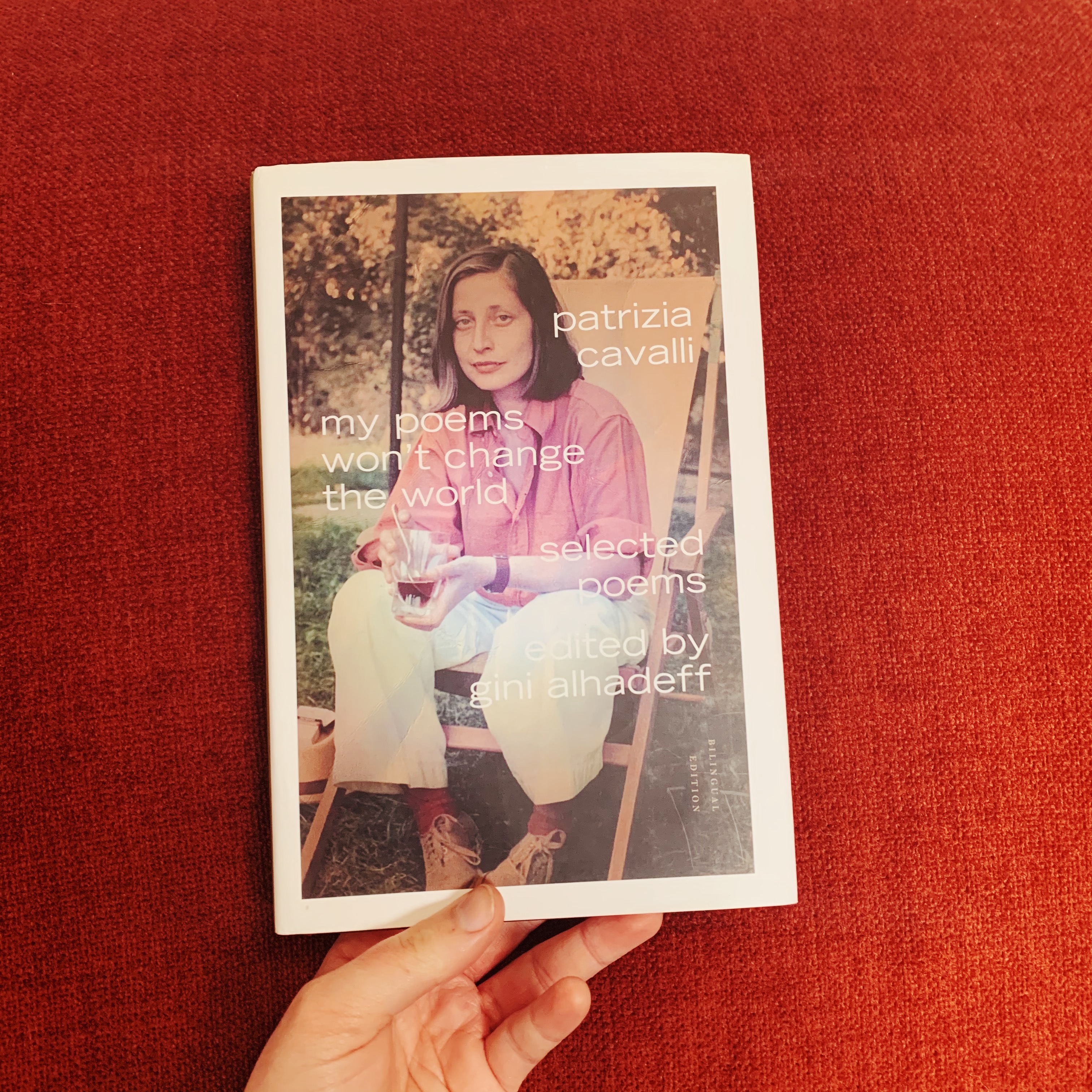 I picked up the selected poems of Italian poet Patrizia Cavalli a few months ago based on a recommendation from Rachel Rabbit White via Twitter. The collection is called My Poems Won’t Change the World, and is named after her first book. The title is so appropriate and specific to the feeling I have found within these poems—Cavalli’s speakers are acutely aware of the fact that life is ultimately mundane, but they are also aware of the vastness that exists beyond the scope of the physical life they are mostly preoccupied with. It’s a perfect distillation of that feeling of being open to the greatness of the world while not being attached to it. A kind of fragile peace.

This feeling is exemplified in Cavalli’s poem “The Atlantic Day,” which I have been obsessing over since I first read it a few weeks ago. Here is the poem in full:

When I use my judgement to open up
to the mild peace of everyday,
to docile afternoons, to broad and natural sleep,
no longer unhappy with the climate
that caresses me, regular, changeless even
—the clot of voices unknots and calls to me
and the smells of the streets seduce me
and I give myself to the corners the piazzas
the faces of old men and girls, and chastely
in love I find every excuse for staying—
suddenly the Atlantic Day returns.

The high light, the high sounds of the light,
and distance opens. That milky twinkling
on the shutters is all it takes, those dense, deep
cracks in the shadows, the glare of freshness,
the waving branches from the balconies,
and look: it’s summer, and the sky is sea.
The city lifts and quivers, sailing,
moved by the breezes. Called from the heights
unanchored, weightless, my senses
no longer gathering but wandering freed
alone and absolute get lost in the air
and send home news of terror.
News: while at home each object
finds its drawer, its shelf,
I become marginal to myself.
My matter evaporates.

The dark, dense island reappears.
Thick substance, promise of cure,
let me enter. Bring me back to my boundaries,
embrace me, mark my contours with your caresses,
embody me with the weight of your body.
But it’s the remedy that makes the illness.

I love the way this poem breaks open the mundane by presenting terror as a force that invades the world that the speaker is content and happy with. The mode of description is particularly strong here—the first two stanzas are dominated by these brief verbless catalogs, so that the opening of the poem has the quality of a bouquet of flowers being slowly assembled. These two stanzas are describing completely different movements—the first stanza moves towards and the second stanza moves away—but both of these forces make themselves known through a process of accrual.

Here, the “Atlantic day” is a metonym for the familiar feeling that takes you from the warm world that invites you to be present (“caresses me,” “calls to me,” “I find every excuse for staying”) into a bigger, colder world that divorces you from sensory reality (“the sky is sea,” “The city lifts and quivers,” “my senses … / wandering freed / alone and absolute.”) That feeling, ultimately, is the result of the fear and depression that comes from having a true sense of the scale of human life in relation to the universe. The second stanza brings us through the dissociation into the poem’s culmination: “News: while at home each object / finds its drawer, its shelf, / I become marginal to myself.”

The third stanza brings us to an interesting turn—the speaker begs the real, mundane world to take her back, to “bring [them] back to their boundaries.” At the final line, we become aware of the cyclical nature of this phenomenon. The real world provides us with a comforting essence of the definite that we lose when we start to widen our scope. “…it’s the remedy that makes the illness.”

This poem is particularly appealing to me because it gets at a question that is central to my process right now—how do you write and exist peacefully in that clear, open feeling of contentment when it is constantly under threat of being subsumed by darkness, especially in these trying times? Cavalli’s use of the word “news” isn’t lost on me here. The best solution I can think of is to acknowledge that the cycle is the truth, and know that my questions and fears around it need to come to the page with me when I write. In other words, I am writing my own account of the Atlantic Day.